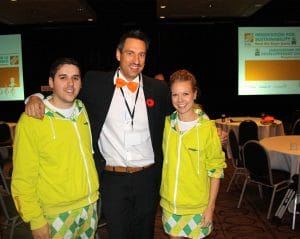 In December of 2010, The Home Depot partnered with the Ontario Ministry of Development and Economic Innovation. Their goal was to search for local sustainable products for the home improvement market. After Home Depot reviewed the application submissions, they invited 60 companies to a Meet the Buyer event in London, ON. There, each company had 15 minutes to pitch their product (much like the CBC’s The Dragons Den). In the end,  Envirobond was lucky enough to be one of the 13 companies chosen for a three-store trial program in London Ontario.

Our trial program in the 3 stores provided an amazing research opportunity. We quickly noticed that very little of what was expected to happen happened. Leaving the product to sell itself, just didn’t work. So, we developed a plan that involved continual education at the store level. By training the Home Depot associates and highlighting our products with a positive bright green image, we made a huge impact. We got into the heads and onto the tongues of the Home Depot associates. With the focus on product knowledge, they can now explain the features and benefits of EnviroSAND. And help customers understand what makes Envirobond different.

The top performer of the 13 companies at the end of the 2011 season was Envirobond. Furthermore, Home Depot confirmed that we were to expand into 64 Home Depot Stores in Ontario in 2012. The expansion came with a request from The Home Depot. They asked President and CEO, Mike Riehm, to speak at the 2012 Meet the Buyer Event. The topic of his speech was “How to be a Successful Vendor to The Home Depot”.

We approached the 2012 season with the same training philosophy, but with an emphasis on tracking our efforts. We hired Trina Josdal to support this initiative. Trina has a commerce degree and focused her efforts on obtaining data on the P.O.P. displays and adjusting them. Every visit made to Home Depot included educating their associates about our product. Using the Envirobond CRM, we tracked metrics and analyzed them monthly to refine our approach.

These efforts made the 2012 season even more successful! Home Depot asked Mike Riehm, for the second year in a row, to be a keynote speaker at the their 2012 Meet the Buyer event. At the event, on November 7, Mike was given confirmation that Envirobond will be expanding its product line into a total of 113 Home Depot stores for 2013.

In his keynote address, Mike spoke about the value of tracking metrics, while continuing to focus on store level training. By tracking metrics, such as frequency of visits, P.O.P. ratings, population density, surrounding population growth etc…, it’s possible to see trends and react accordingly.