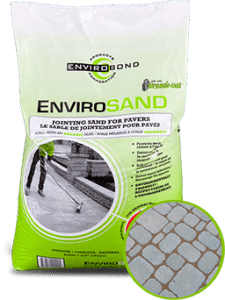 Making the decision to redo your driveway, walkway or patio with interlocking paving stones is a big investment. A cobblestone, paver or brick driveway is among the most expensive ways to finish your hardscaping project. So when it’s finished you want to make sure it looks as good five years down the road as it does the day it is installed. That means an end result that is level, with no weeds creeping up in the joints between the paving stones.

“Curb appeal is important to today’s homeowner,” says Mike Riehm, president of EnviroBOND, manufacturers of EnviroSAND. “Investing time, money and effort into a project with paving stones will be a waste if the stones are heaving. Or if weeds are sprouting up in the cracks and ants are crawling all over the place. Using the right kind of sand in the joints between the stones is important. It can be the difference between a beautiful street view of your home, and a disaster getting worse by the day.”

EnviroSAND is a stabilized joint sand that we specially designed for use with paving stones. It is a combination of traditional jointing sand and an organic glue made from a renewable plant resource. We designed out plant glue to form an adhesive gel that binds sand particles together in contact with water. As a result, this gel keeps the sand from washing out of the joints, which is the number one cause of joint sand loss in a paver system.

And when sand washes out, weeds creep in!

The Truth About Weed Growth

There is a misconception that weed growth in pavers occurs from below, growing up under the paving stones. “The truth is”, said Riehm, “weed growth in a paver system is primarily caused by seeds getting trapped in the joints from above and flourishing into a nuisance.”

In addition to keeping the sand in the joints, EnviroBOND has a natural weed deterrent to tackle this problem. Initially, we scientifically altering the plant composition to prevent biodegradation. By doing this we stumbled upon a Natural Weed Deterrent. We simply elevated the pH of the material and, as a result, EnviroSAND creates a toxic environment for which seedlings can’t germinate. By preventing these seeds from germinating, EnviroBOND provides a unique and functional Weed Deterrent.

“If, by chance, you live in a harsh climate and there may be shifting among your paving stones. Using EnviroSAND makes your repairs easier,” says Riehm. “Because of the self-repairing nature of EnviroSAND, it can easily be reworked. So this makes the lifting and re-laying of segments an easier task.”

EnviroBOND is a company that developed in the 1990s through because of combination of landscape design and environmental awareness. Developed in Canada and currently distributing through Canada, USA and Europe, EnviroBOND’s products have evolved as a result of this knowledge.  “Green Science” is the foundation and backbone of their portfolio. By using Natural materials to solve problems in Nature, Envirobond has been able to truly live the phrase “We were Green before Green was cool.”