Is It Possible to Have a Sustainable City?

on December 6, 2017
in Municipalities 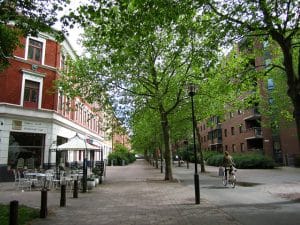 The growth of the population and urbanization has led to new challenges for cityscapes.  Sustainability is central to the expected growth, specifically with 60% of the population expected to live in urban areas by 2050 with 3.9 billion people living in cities in 2014.  With the influx of the population is also the need to match habitats with sustainability and an infrastructure which supports the needs of the growing number of people which are rapidly moving to certain regions.

Urban placemaking and city growth is recognized today as essential for the survival of many around the globe.  Gathering of resources is one component which many are inclined to move to cities for.  More important, over half of the GDP (gross domestic products) are produced in urban areas.  To have required money and resources, individuals and families are being pushed to urban areas.  This accounts for over 55% of the population in emerging markets and up to 85% of the population in higher income countries (Worldwatch Institute).

As individuals move to cities, it creates more pressure and an impact on the urban areas.  There is an average of 60 – 80% energy consumption which takes place in condensed areas as well as 75% energy consumption which takes place.  As a combination of energy, water and waste climbs, municipalities are required to examine the infrastructure in relation to the environment.  The pressure is not only on the numbers in the population as well as the amount of consumption in urban areas.  It also is showing that the population is dependent on urban regions and will continue to climb in the next 2 – 3 decades, specifically in relation to resources and opportunities within city settings.

The current status in cities is currently under the regime of industrialization as a city center.  Land use has specifically been built under this regime, following central areas for industrial work and economic growth, while other regions do not have the proper infrastructure for residential areas.  Urban density relates to higher forms of energy consumption as well as relationships to human needs and socio-economic factors (Worldwatch Institute).

The alteration in urban areas requires new planning and infrastructure development for cities.  Urban placemaking is a central focus, specifically which relies on green and natural areas, better use of consumption and development which positively impacts the health and well – being of those in the communities.  Waste policies are a central component to assist with the growth of communities.  Green areas, such as parks and vertical green landscapes are also a central item to assist withe building sustainable cities.  Prominent materials, such as environmentally friendly landscape materials, are also a key to reduce risk of health while increasing the balance with the environment.  With landscape friendly materials, it is possible to reduce many of the declining impact regions of cities.

Sustainable cities are a possibility for growing urbanization.  The requirement is to re-think the infrastructure and architecture.  Using placemaking techniques is a central component, focusing on greenery as well as environmentally friendly landscape materials.  It is also essential to look at placemaking in terms of residential areas and the relationship to certain regions and how residents are able to access resources.  Living within  certain proximity to greenery, having more access to pathways, medical supplies and upgrading the waste methodologies will assist in creating sustainability with urban placemaking.