on October 18, 2017
in Landscape Architects, Municipalities 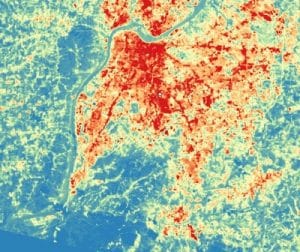 Urbanization and infrastructure was based on convenience of location and accumulated resources.  However, the public spaces did not look at the environmental impact of the regions where building quickly took place.  The heat island effect is one which continues to threaten the environment with rising temperatures and constraints.  Many are finding that if the path of the heat island effect continues, it will lead to human health threats, problems with resources for energy and economic decline.

The public spaces not only indicate that there is a threat to the individual’s health and overall society.  The impact is one which will effect 80% of those in the U.S. living in cities that are in environmental decline.  The problem is one which is trapping greenhouse gas emissions, triggering health issues such as heart attacks and asthma as well as other respiratory problems.  The issue is one which is based on trapping the heat in urban areas without the greenery and environmental solutions to balance the issue.

With the heat island effect taking hold of the infrastructure, are also climate scientists that are measuring the detriment in public spaces.  It has been found that 57 cities in the U.S. have increase in temperature by almost 50%.  The air pollution is combined with rising temperatures, showing a direct link to the environmental hazards in the urban areas. The public spaces also showed that 75% of the cities had heat island effect as a central problem based on the accumulated infrastructure and pollution.

While the central issues show an expected higher rise in temperatures over the next decade, there are ways to begin reducing the measurements.  Trees, parks, white roofs and other natural approaches are essential for public spaces.  Research of various climate scientists (Climate Central) also state that the use of alternative materials for urban infrastructure and refurbishing would reduce the urban heat islands. This naturally works with the environmental elements, such as temperature, rain and weathering.

The development of urbanization and the associated population also requires alterations in infrastructure.  Assessing materials that are compatible with the environment and are natural assists with reducing the heat island effect. By beginning to change the infrastructure of deteriorating public spaces, it will assist with reducing environmental hazards, health complications and economic decline.