on November 8, 2017
in Landscape Architects, Municipalities 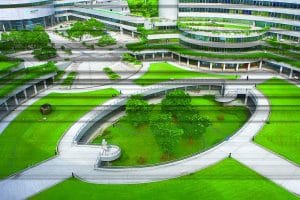 As environmental and climate changes face cities, are also solutions which are required to alter the outcome of increasing heat and rising pollution levels.  The central element that many are finding as a primary concern is to focus on creating a green infrastructure.  Cityscapes which expand the blueprint of development to transform to green places also have the capacity of reducing the impact of environmental hazards.

Urban development is known to impact the environment, specifically because of the materials and layout used within dense regions.  As building materials and hardscapes, which are not environmentally friendly, take over certain areas, the environment also tilts with more hazards in the region.  UHI, or urban heating island is one of the greatest dangers. Rising temperatures from heat which is absorbed by buildings and pathways remains problematic.  Sediment runoff and higher pollution levels compliment this issue, specifically with the inability to maintain the growing numbers of people and the urban building taking place.

The concept of a green infrastructure is able to combat against these underlying problems.  According to a recent study (Landscape and Urban Planning 2015), a green infrastructure is at the heart of changing the deterioration of urban areas.  There are four central areas which are noted to reduce pollution, increase biodiversity habitats and lower the UHI effect within cities.  By developing green places, landscape architects and cities have the capacity of creating greater balance within the environment while maintaining the urban development taking place.

The concept of green infrastructure is one which can greatly reduce the harm within urban areas currently taking place, specifically in relation to UHI and the accumulation of pollution.  Bringing balance through greenery, systematic changes and additional environmental items, urban areas are able to continue developing areas while creating balance within the ecosystem with upgraded green places.

Previous post: How to Choose Your Landscaping Products Supplier