Urban Spatial Patterns and the Relationship to Green Sustainability

on November 1, 2017
in Landscape Architects, Municipalities 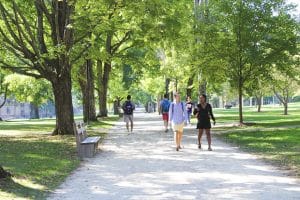 Creating urban green space is of vital importance to those who are looking for solutions to upgrade and sustain cities.  The need to reduce urban heat island effect (UHI) and the impact of sediments and pollution is a highlight among municipalities and landscape architects.  There are specific relationships to spatial patterns as well as how this impacts urban planning.  Understanding the relationship to reducing UHI by spatial patterns and developing green urbanization is one to look at with today’s cityscapes.

As temperatures increase with urban heat island effect are also central issues relating to city planning.  UHI is inclusive of higher temperatures relating to both the atmosphere and surface areas.  It is related specifically to both the central urban areas and is now extending to the surrounding rural areas creating a bubble of heat that impacts the environment, the health of the people and the economy.  Developing an urban green space to respond to the impact is one which is now central to the development and sustainability of cities.

According to a study by the ISPR Journal of Photogrammetry and Remote Sensing, there is an effect with the relationship of green space and surface temperatures based on the configuration of the spatial areas as well as the materials and composition of the areas.  The research included measurements of the metrics of a landscape, density of the edges and paths of certain areas.  It was then shown in relation to a green space map, showing the relationship between the spatial distance and the thermal band of the given areas.  The several relative measurements were then used to measure the relationship of urban green space to the impact of UHI.

From the study, it was noted that the metrics of the landscape are a primary concern in the development of urban green space.  The spatial configuration has a direct impact on UHI and how the urban spaces react to heat.  It was also shown that all three of the independent determinants had a direct impact, even though secondary, to the UHI and responses from the environment.  When looking at the spatial areas, it was determined that expansion of street trees, environmental materials and vegetation which had an association with certain metrics would also provide sustainability in urban planning.

With the considerations of spatial development, is also the understanding that urban green space requires a certain amount of greenery in relation to metrics.  By creating responses with specific materials and vegetation in relation to the spatial distance, there is a direct impact on the urban sustainability.  The environmental planning offers adaptation to the relative space and distance with greenery and environmental materials, specifically which is expected to reduce the impact of UHI.

Developing green solutions for a sustainable future is essential for urban sustainability.  Looking at the spatial relationship to UHI shows a direct impact on temperature and the spatial use of greenery and environmental materials.  By expanding the urban green space, there is the ability to create a positive outcome that offers balance between the environment and urbanization.

Next post: Water Erosion in CityScapes and Balance of the Ecological System

Previous post: Why You Should Be Looking For an Asphalt Alternative